My first search assignment – more than 40 years ago – was for a plant manager for an automotive parts manufacturing company. There was no job description for the role, so when I met the company president, I asked this one question:

What does the person need to do to be successful? 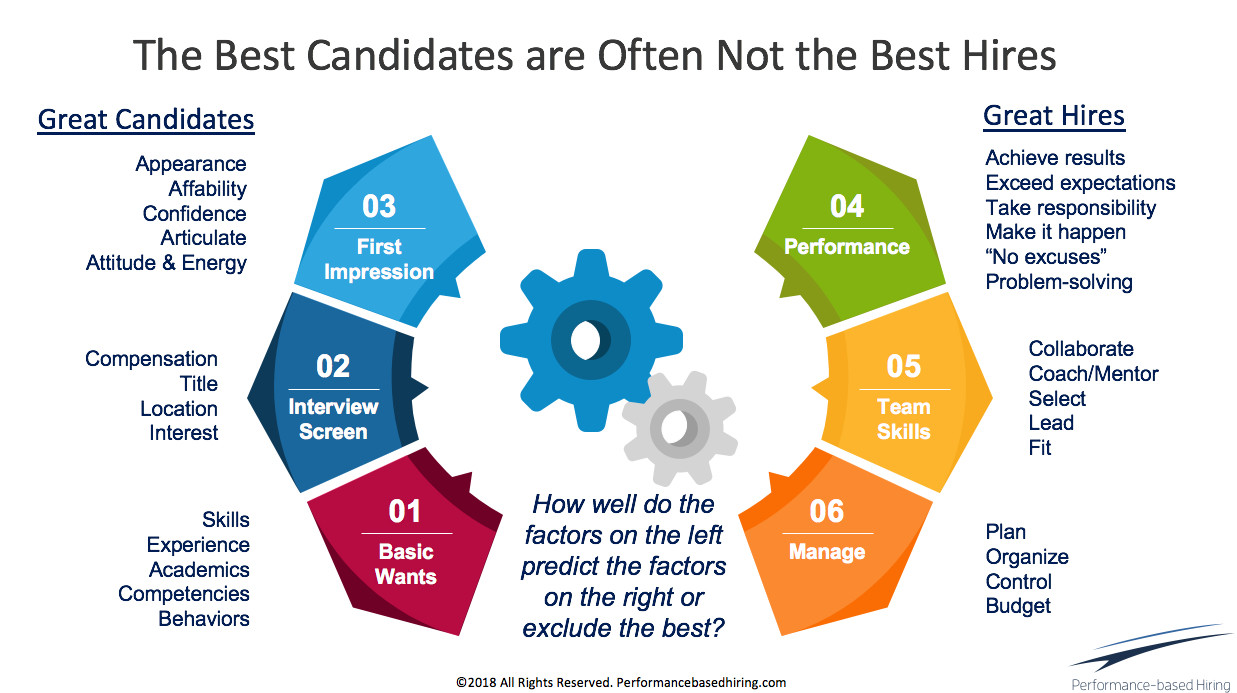 To gain some clarity we took a tour of the plant to see what needed the most fixing. These are the tasks the person taking the job would need to accomplish in order to be a considered a "Great Hire," as shown in the infographic. Based on a 45-minute tour, we developed these five KPOs (key performance objectives):

It took about three weeks to find a person for the role. During the assessment process I asked this one question for each of the KPOs:

What have you accomplished that most directly relates to (describe the KPO)?

Based on the impact of this one-question process and how it accurately predicted on-the-job performance, I was asked to speak at a number of events for CEOs of small to mid-sized companies hosted by TEC/Vistage and YPO. (These are professional organizations for CEOs.)

About a month after one of these events, a CEO who had attended a program called me and asked what the one question was he needed to ask candidates. He had forgotten the context behind the question. I told him the question didn’t matter unless he defined success first as a series of KPOs. Since the person’s past accomplishments were benchmarked against these real job needs, defining the actual job requirements first was essential.

He then said he didn’t have time because a candidate for a VP Operations position was waiting in the lobby.

Given this condition, I suggested a Plan B. It involved him and the candidate taking a tour of the factory first and walking by each problem area that needed to be addressed. For each situation I told the CEO to describe the problem in some detail and ask the candidate how he would fix it. If the solution seemed reasonable, ask the candidate what he had accomplished that was most comparable.

The CEO called me a few hours later saying the candidate had a logical approach for solving each problem but had very few examples of actually implementing similar solutions. Based on just a ten-minute pre-interview conversation, his conclusion was profound: The person was more a consultant than an operating manager who could implement comparable solutions.

Over the years this process morphed into Performance-based Hiring and is fully described in my first book, Hire with Your Head (Ed.1, 1997. John Wiley & Sons, Inc.) and updated in the Essential Guide for Hiring & Getting Hired (2013. Workbench Media, 2013).

The Best Candidates are Rarely the Best Hires

It took about 25 years and hundreds of case studies to create the infographic above. The conclusion is straightforward: the best candidates are rarely the best hires and the best hires rarely have all of the skills and experiences listed on the traditional job description. Despite this commonsense view, I find it surprising that companies are still trying to find great candidates more efficiently using whatever new technology becomes available.

If you’re in a similar dilemma, I suggest you ask this one question before ever hiring someone again for a new role: What does the person need to do to be successful? You’ll quickly discover the latest technology will work a lot better when you get the answer.